LOGIN | REGISTER
You are using an out of date browser. It may not display this or other websites correctly.
You should upgrade or use an alternative browser.

THE HUB FOR PATRIOTS FANS SINCE 2000
THE LATEST PATRIOTS MEDIA NEWS:

Matt Cassel: Inside Bill Belichick's relationship with backup QBs past and present 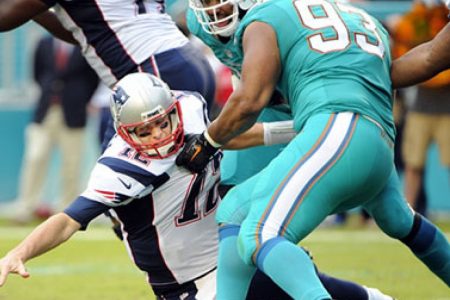 VIDEO: A Look Back At The Patriots 2003 Overtime Win In Miami 17 Years Later
By: Robert Alvarez

Status
Not open for further replies.

I gave up the Red Sox a decade or more ago. And never came back.

He is the worst.

I didn't order assholes with my whiskey.

The Tom Brady Of Not Having A Gf

PatsFans.com Supporter
I might be right there with you. I have do some soul searching.
B

In the Starting Line-Up

Thanks Bob, you chose Goodell over your fans, you're dead to me.

No Bob, we don't trust your judgment or you. You SUCK!

You know what happens when you let one false accusation of cheating go unanswered, and accept an outlandish penalty. Now everyteam that has ever held a grudge will be able to get away with murder in terms of suggesting the patriots cheated.

This is an insult to an entire fanbase that would do anything for this team.

In Kraft deciding to accept the penalty, he has essentially sealed the history books on the patriots. Any question regarding legitimacy will be met with Spygate, and deflating footballs. Krafts lack of spine here disgusts me.

Addicted to the light

And he didn't even get his letter.

My reaction is beyond disappointment. WAY beyond.

Brady is free to pursue his NFLPA appeals, which he will probably win.

George AtallahVerified account‏@GeorgeAtallah
The Patriots may not appeal, but this will not impact the NFLPA appeal of the 4 game suspension of Tom Brady.

Please to help me with my rucksack.

This does not surprise me at all.

What a disgrace to this franchise, fan base and players. At the end of the day, Kraft was bluffing and he let a glorified dictator/commissioner put him in his back pocket. So disappointed in this leadership; Jonathan and Robert don't have a backbone in their body.

Any chance James Orthwein could be resurrected? Because you can bet your *** he would show more spine than these two clowns.
Last edited: May 19, 2015

I didn't order assholes with my whiskey.

PatsFans.com Supporter
If it comes with an apology to Brady and dropping of the suspension, maybe he took a bullet for the QB. I could understand that. But I don't see that.
M

I think Goodell could **** his woman and he still ends up apologizing.

He doesn't deserve BB and Brady to play for one of his franchises.
S

I'm done generally. I will certainly never again buy anything that will benefit the Krafts. He has accepted the cheater brand forever

PatsFans.com Supporter
I was a rabid bruins fan, but when the officiating became so bad it loked like the league was fixed i left.

i was a big sox fan in the seventies till haywood sullivan screwed the contracts of three of its best players. So after 15 years or so I left.

If he thinks the "rhetoric" will disappear he's a fool.

2nd Team Getting Their First Start

Kraft gets to hide in his tower and make billions. Meanwhile, I can't wear a single item of Patriots clothing without ridicule and being called a cheat.

Thanks for pissing on all your fans, so the other 31 can gleefully rip us apart.

On the Game Day Roster

There had better be a strong quid pro quo from the NFL. Also, what does this do to Brady's appeal?

Status
Not open for further replies.